As discussed in previous topics, Taichi kernels automatically parallelize for-loops in the outermost scope. Our compiler sets the settings automatically to best explore the target architecture. Nonetheless, for Ninjas seeking the final few percent of speed, we give several APIs to allow developers to fine-tune their programs. Specifying a proper block_dim, for example, might result in a nearly 3x speed gain in examples/mpm3d.py.

It is worthy to quickly discuss the thread hierarchy on contemporary GPU architectures in order to help you understand how the previously mentioned for-loop is parallelized.

From fine-grained to coarse-grained, the computation units are as follows: iteration, thread, block, and grid.

Because Taichi separates data structures from computation, developers may experiment with alternative data layouts. Choosing an efficient layout, like in other programming languages, may significantly enhance performance. Please consult the Fields (advanced) section for further information on advanced data layouts in Taichi.

Taichi's parallel loop is implemented internally with Grid-Stride Loops. This means that each physical CUDA thread may handle several items in x. In other words, the number of threads started for sum can be less than the shape of x.

One optimization offered by this method is the substitution of a thread-local memory access for a global memory access. Instead of directly and atomically adding x[i] to the global memory destination s[None], Taichi preallocates a thread-local buffer upon entering the thread, accumulates (non-atomically) the value of x into this buffer, and then atomically adds the result of the buffer back to s[None] before exiting the thread. If each thread handles N items in x, the number of atomic additions is reduced to one-Nth of its original amount.

TLS has resulted in a 100x increase in speed. We also demonstrate that TLS reduction sum achieves equivalent performance to CUDA implementations; for more information, see the benchmark report.

BLS intends to enhance stencil computing processes by utilizing CUDA shared memory. This optimization begins with users annotating the set of fields they want to cache using ti.block local. At compile time, Taichi tries to identify the accessing range in relation to the dense block of these annotated fields. If Taichi is successful, it creates code that first loads all of the accessible data in range into a block local buffer (CUDA's shared memory), then replaces all accesses to the relevant slots into this buffer.

You do not need to be concerned about these fundamental elements as a user. Taichi automatically does all inference and global/block-local mapping. That is, Taichi will preallocate a CUDA shared memory buffer of size 5x6, preload a's contents into this buffer, then replace all a (global memory) accesses with the buffer in the loop body. While this basic example does not change a itself, if a block-cached field is written, Taichi produces code that returns the buffer to global memory.

BLS does not come cheap. Remember that BLS is intended for stencil computations with a high number of overlapping global memory accesses. If this is not the case, pre-loading and post-storing may actually degrade performance.

Furthermore, recent generations of Nvidia GPU cards have closed the read-only access gap between global memory and shared memory. Currently, we discovered that BLS is more effective for storing the destinations of atomic actions.

As a general rule of thumb, we recommend running benchmarks to determine whether or not you should enable BLS.

The first time a Taichi kernel is called, it is implicitly compiled. To decrease the cost in subsequent function calls, the compilation results are retained in an online in-memory cache. The kernel can be loaded and launched immediately as long as it remains unaltered. When the application exits, the cache is no longer accessible. When you restart the programme, Taichi must recompile all kernel routines and rebuild the online in-memory cache. Because of the compilation overhead, the first launch of a Taichi function can typically be slow. 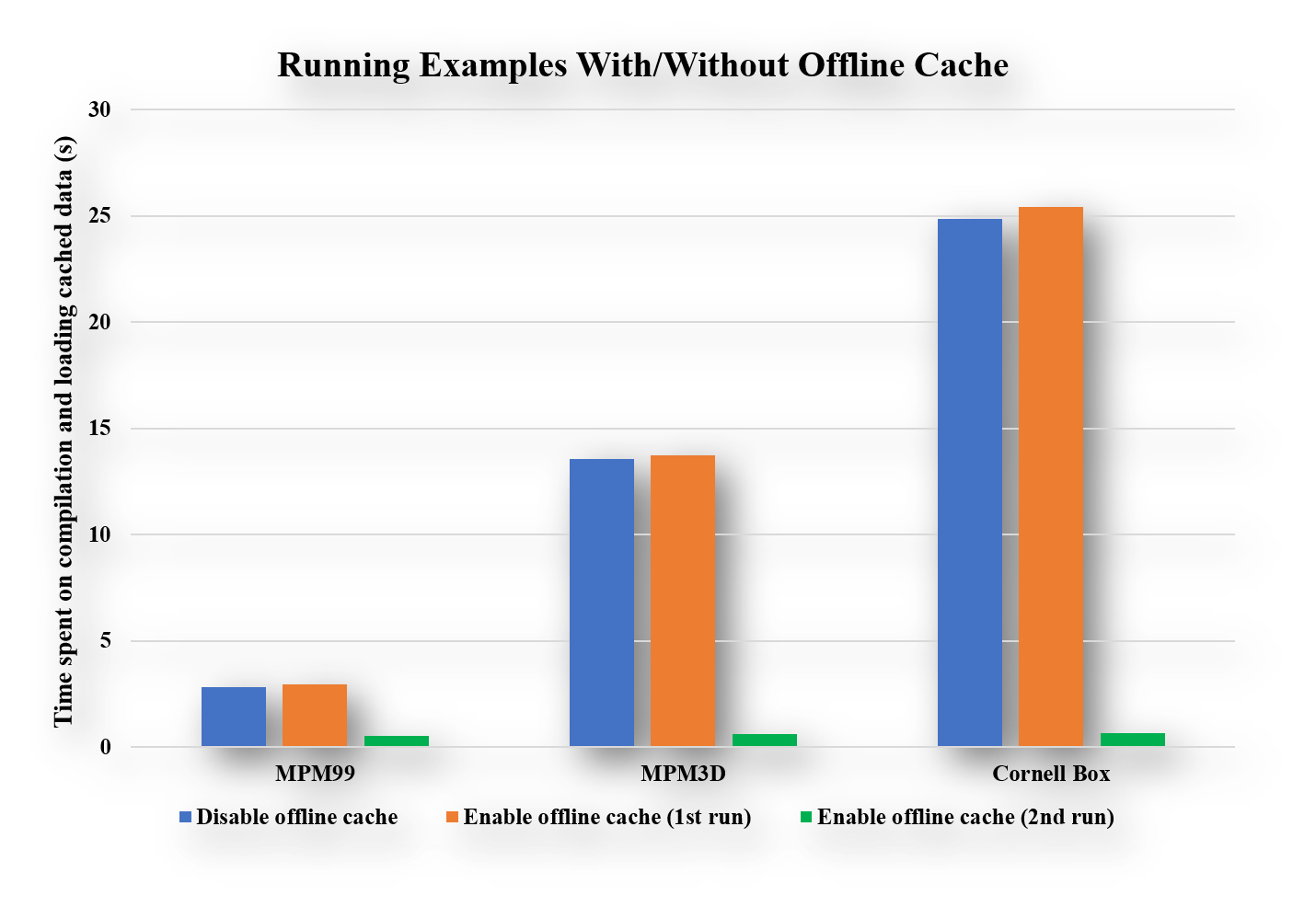