Taichi's computation IR is designed to be

For example, a simple Taichi kernel

may be compiled into

Use ti.init(print_ir=True) to print IR of all instantiated kernels.

See Life of a Taichi kernel for more details about the JIT compilation system of Taichi.

The internal organization of Taichi's data structure is defined using the Structural Node ("SNode", /snōd/) tree system. The SNode system might be confusing for new developers: it is important to distinguish three concepts: SNode containers, SNode cells, and SNode components.

A hierarchical data structure in Taichi, dense or sparse, is essentially a tree with interleaved container and cell levels. Note that containers of place SNodes do not have cells. Instead, they directly contain numerical values.

The following figure shows the hierarchy of the data structure. The numbers are indices of the containers and cells. 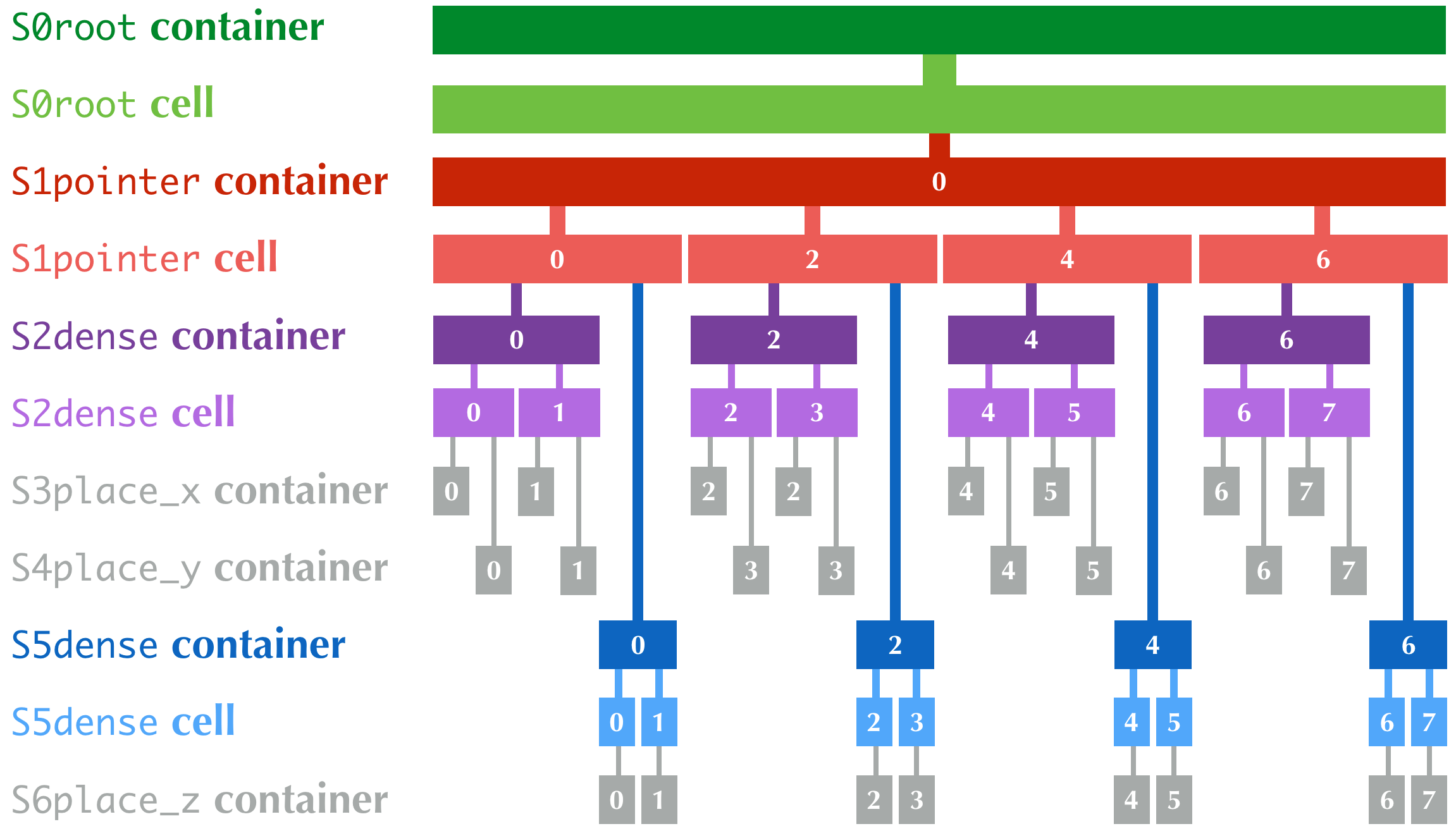 Note that the S0root container and cell do not have an index.

In summary, we will have the following containers:

... and the following cells:

In struct compilers of supported backends, each SNode has two types: container type and cell type. Again, components of a higher level SNode cell are containers of a lower level SNode.

Note that cells are never exposed to end-users.

We are on our way to remove usages of children, instances, and elements in Taichi. These are very ambiguous terms and should be replaced with standardized terms: container, cell, and component.

Struct-fors in Taichi loop over all active elements of a (sparse) data structure in parallel. Evenly distributing work onto processor cores is challenging on sparse data structures: naively splitting an irregular tree into pieces can easily lead to partitions with drastically different numbers of leaf elements.

Our strategy is to generate lists of active SNode containers, layer by layer. The list generation computation happens on the same device as normal computation kernels, depending on the arch argument when the user calls ti.init().

List generations flatten the data structure leaf elements into a 1D list, circumventing the irregularity of incomplete trees. Then we can simply invoke a regular parallel for over the 1D list.

gives you the following IR:

The list of place (leaf) nodes (e.g., S3 in this example) is never generated. Instead, we simply loop over the list of their parent nodes, and for each parent node we enumerate the place nodes on-the-fly (without actually generating a list).

The motivation for this design is to amortize list generation overhead. Generating one list element per leaf node (place SNode) element is too expensive, likely much more expensive than the essential computation happening on the leaf element. Therefore we only generate their parent element list, so that the list generation cost is amortized over multiple child elements of a second-to-last-level SNode element.

In the example above, although we have 16 instances of x, we only generate a list of 4 x S2bitmasked nodes (and 1 x S1dense node).

In some cases, it is helpful to gather certain quantitative information about internal events during Taichi program execution. The Statistics class is designed for this purpose.

Note the keys are std::string and values are double.

To print out all statistics in Python:

Embedding Taichi in python has the following advantages:

However, this design has drawbacks too:

Each SNode can have a different virtual-to-physical mapping. physical_index_position[i] == -1 means the i-th virtual index does not correspond to any physical index in this SNode.