Skip to main content
Doc Home
>>
Get Started
>>
Hello, World!
This is documentation for Taichi Docs v1.3.0, which is no longer actively maintained.
For up-to-date documentation, see the latest version (v1.4.0).
Version: v1.3.0

Taichi is a domain-specific language embedded in Python and designed specifically for high-performance, parallel computing.

When writing compute-intensive tasks in Python, you can take advantage of Taichi's high performance computation by following a few extra rules. Generally, Taichi provides two decorators @ti.func and @ti.kernel, which instruct Taichi to take over the tasks. Its just-in-time (JIT) compiler compiles the decorated functions to machine code, and all subsequent calls to these functions are executed on multi-core CPUs or GPUs. In a typical compute-intensive scenario, such as a numerical simulation, Taichi can accelerate performance by 50x~100x compared with native Python code.

Taichi also has a built-in ahead-of-time (AOT) system for exporting your code into binary/shader files, which can then be called in C/C++ and run without the Python environment. See the AOT deployment for more information.

A basic fractal example, the Julia fractal, can be a good starting point for you to understand the fundamentals of the Taichi programming language.

Save the code above to your local machine and run this program.

You get the following animation:

This line calls ti.init() to customize your Taichi runtime depending on the arguments passed into it. For now, we only introduce the most important argument, namely, arch.

The argument arch specifies the backend that executes the compiled code. A backend can be either ti.cpu or ti.gpu. When ti.gpu is specified, Taichi moves down the backend list of ti.cuda, ti.vulkan, and ti.opengl/ti.metal. If no GPU architecture is available, Taichi falls back to your CPU device.

You can also directly specify which GPU backend to use. For example, set arch=ti.cuda to run your program on CUDA. Taichi raises an error if the target architecture is unavailable. See the Global Settings for more information about ti.init().

The code snippet defines a field whose shape is (640, 320) and whose elements are floating-point numbers.

field is the most important and frequently used data structure in Taichi. You can compare it to NumPy's ndarray or PyTorch's tensor. But Taichi's field is more flexible. For example, a Taichi field can be spatially sparse and easily switched between different data layouts.

We will introduce more advanced features of field in other scenario-based tutorials. For now, it suffices to know that the field pixels is a dense 2D array.

Lines 9~22 define two functions, one decorated with @ti.func and the other with @ti.kernel. They are called Taichi function and kernel respectively. Taichi functions and kernels are not executed by Python's interpreter but taken over by Taichi's JIT compiler and deployed to your parallel multi-core CPU or GPU.

The key to high performance lies in Line 15:

Taichi offers a handy syntax sugar: It parallelizes any for loop at the outermost scope in a kernel. This means that you can parallelize your tasks using one plain loop, without the need to know thread allocation/recycling or memory management.

Keep in mind that the for loops not at the outermost scope are not parallelized but handled serially:

You can also serialize a for loop at the outermost scope using ti.loop_config(serialize=True). See Serialize a specified parallel for loop for more information.

The program iterates over pixels 1,000,000 times, and the fractal pattern stored in pixels is updated accordingly. Call gui.set_image() to set the window and gui.show() to display the synchronized result on your screen.

Congratulations! After walking through the short example above, you have learned the most significant features of Taichi:

The Julia fractal is one of the representative demos Taichi provides. To view more selected demos in Taichi gallery: 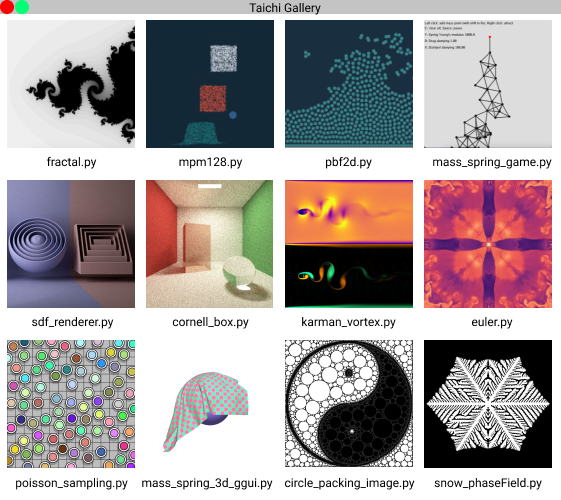 The following table lists the supported operating systems and the backends that Taichi supports on these platforms:

You are now ready to move on and start writing your own Taichi programs. See the following documents for more information about how to use Taichi in some of its typical application scenarios: